So, today is Day 1 of my Travel Photo A Day. I wasn’t quite sure what photo to use today to start with. I landed at about 9am this morning (8am British Summer Time) and got to my hostel mid morning. I’ve not really been out with my camera; or really been out that much. I went for a stroll to Pick n Pay (like SA Tesco) to get some food to eat after my run. I had a little nap because I was still shattered after the 11 hour night flight where, although I slept, it wasn’t great sleep. I can’t complain about the flight though; good service, decent food and I got two seats to myself. I went for a run this afternoon (see Runs Around the World #4) then came back and had a shower, food and read my book for a bit.

It was weird, sat reading my book in the garden in the sun. I felt guilty. Like I should have been doing something. It hit me as I was sat there that I am going to have to get used to this. Relaxing. No work. Plenty of time to chill out. I have to admit I felt a bit panicked. What would I do? How will I fill my time? Can I do it? I don’t sit down that much. I like to have stuff on. This might be a challenge. I’m sure I’ll get used to it but it’s a little bit weird. My next 4 weeks will be like having a job because I’m doing an internship which will be Mon-Fri. So like work, I’m just not getting paid. This might help me with the transition. And where I am today is just a transition; there’s not that much to do or see really, unless I venture out a bit further for longer.

So, today’s photo was what happened this afternoon/evening. I had said I was going to have a break from drinking for a bit. Well, that hasn’t happened. I got  persuaded to have a brandy and coke by some guys staying in the hostel. We went out to get pizza and beer, and have had interesting discussions about apartheid and Marcus was showing us lots of videos of spiders and bungee jumps gone wrong. He has an unhealthy obsession with YouTube. I’ve been sensible and stopped drinking though, it’s not a session, rather just a couple of beers. I’ve even had water. Get me. Well, I do have to be at the airport at half 8 tomorrow morning too.

It was alright brandy though. So, have I started as I mean to go on? Only time will tell. And yep, all you lot who said I wouldn’t last, you win. Only one out of the two though 😛 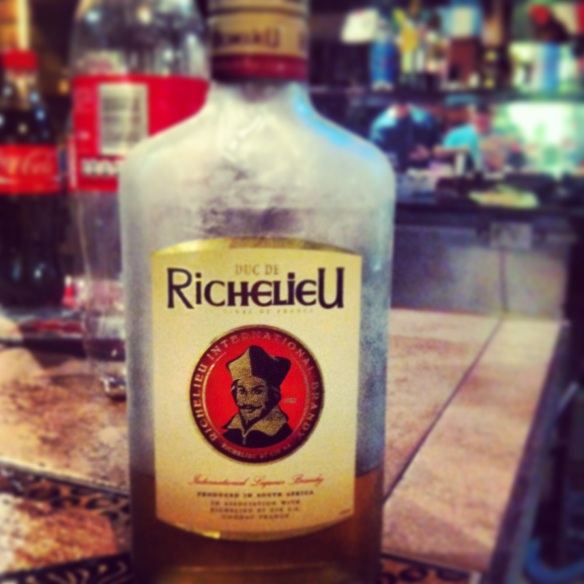