Wow this week seems to have gone quick. It’s Friday already which is my day off, so I’m sat writing this sat in the garden in the sun enjoying a bit of downtime. Although, its surprising how quickly time goes when all I’ve done today is catch up on some emails, news, done a bit of writing, face-timed my Dad and chatted to the other volunteers over lunch. It’s 3pm already and I’m only just starting this.

I feel nicely chilled out. I’ve got over my need-to-be-doing-something-every-minute and forced myself to just enjoy sitting. It’s different, and I still feel very lazy but also feeling very relaxed. My brain isn’t full of lists, or things to do or random thoughts of stuff I should be thinking about. It’s fairly empty and I’m just enjoying the quietness, lack of responsibility and a Milkybar.

I went into town on Wednesday lunchtime with some of the others to visit the curio market (a little craft market) and Shoprite for a chocolate, crisp and yoghurt run for everyone. The traders at the curio market are very friendly. Obviously, because they’re trying to get you to buy things. But, some of them are really nice and quite happy to have a chat even if you’re not buying anything (one of the good things about being on a RTW trip means you can’t actually buy loads of stuff, even if you want to – I bought a bracelet and a fridge magnet. That’s all.). The standard greeting here is ‘Hello, how are you?’. And they always shake your hand. But not with any old handshake. With a special handshake. It’s a normal handshake, then a kind of gangster grab, then normal handshake again. It’s like a club. I like it.

Weekday amusement this week happened most unexpectedly when I was teaching maths on Tuesday. There I was, going through how to change improper fractions into mixed numbers with my class (I’m not going to forget that) and in trotted a goat. Yep, a Goat. Only in Africa. Cue me and some of the kids chasing it round the classroom like a Benny Hill sketch to get it out. I think it provided a welcome distraction from fractions for the kids who, naturally, found it hilarious.

There has also been running excitement this week! You can tell the excitement by the use of an exclamation mark, I don’t do it that often.  So, running excitement #1: I ran a new running route! This is BIG excitement. I was convinced I would be running in laps for the whole 4 weeks. And although a run, is deathly dull. So, imagine how excited I was when I managed to persuade Daryl, general manager here, to come on a run with me, because we could run a slightly bigger lap. Just out a little bit into the park along a couple of the roads, down by the Zambezi river and back round by the house. Oh, it was heaven, and it made my day. It was so nice to run in a bit more of a straight line, and not on sand. It was also as the sun was setting. So imagine this: running through the African bush as the sun was setting, past a herd of impala grazing, then past the banks of the Zambezi river, not a sound to be heard. Wonderful. 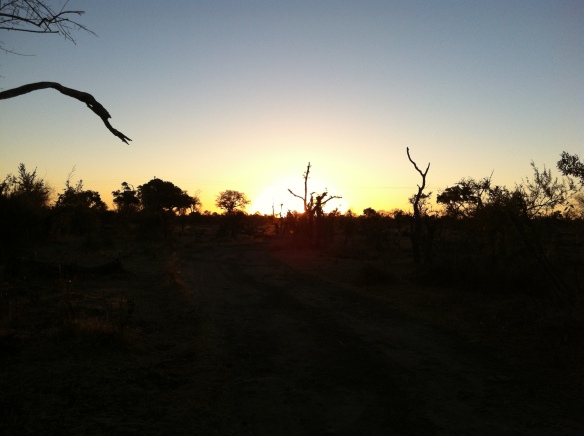 Hopefully we’ll get to run again. Daryl hadn’t ran for a few months, so I may just have outran him a little bit on the second lap. Hopefully I’ve not put him off and next time he’ll be able to go for longer ;P

Running excitement Number 2: I had my first article published! I’ve agreed to be a regular contributor to running website The Running Stories, by writing about my Runs around the World. I’m very excited about this, I love running, travel and writing, and so I can combine them all. I know I have this blog where I was doing that already, but that really started just for me, my friends and family. This is out there, in the big wide world on a proper website. Hopefully people will be interested in what I have to say, and it’s great experience for me. I’d love to do more writing while I’m away so we’ll see where this takes me. You can read the article here.

Another website (Take a Challenge) has also been in touch, asking if they can do an article on me, so I’m currently working with them to put something together. It’s a bit strange, to think people want to write about little old me or want me to write something for them. Strange, but exciting. Anything can happen in this big old world!

Today it feels wrong to say it’s been a good day, but it has been a day of mixed feelings. Unfortunately I received some sad news first thing, and, although it was something I was expecting at some point, it’s still a shock and this morning left me feeling far away from home and unable to give support to those who need it most right now. You know I’m thinking of you all though, so much love sent and please take care of yourselves and look after each other to get through this difficult time.

Today was my first day of teaching. Actual teaching of children in a school. Teaching English, Maths and Literacy. Me. Someone who’s not a teacher, hasn’t got any teaching quals and who hasn’t done anything like this before (OK, so I’ve done loads of training and presentations but that’s at work and I’m not sure training someone how to make a posting on Origin or talking about a project I’ve managed is quite in the same league). I’ve had to think about how to explain the stuff that I learnt years ago, already know and just take for granted. Anyone want to explain long division or multiplying fractions? Or sentence construction? To kids? Who speak a different language? You can perhaps see why I was bricking it this morning.

My brother said to just take it in my stride. I just decided to take the same approach I always have when doing stuff like this. Like presentations, training, speeches or interviews. Prepare as much as I can and then just blag it. Sometimes it comes off, sometimes it doesn’t. Most of the time it does. And most of the time no one else will realise you’re blagging it anyway.

And you know what? It was great fun. Yep, definitely daunting. And nerve wracking. But, I think I got the hang of it. And now I’ve done it once I can do it again. And it will be easier next time, and the time after that. I know [roughly] what I’m doing now. I’m getting an idea of the levels of the kids and what and how much they need to be taught.

I have Grade 5, which isn’t really a set age as such, more that they are grouped by ability as the Zambian school system isn’t compulsory and consists of 7 years of primary schooling (with an official entry age of 7) and 5 years of secondary schooling. My class are a great bunch of kids, so happy and keen to learn. They were fascinated by my iPhone and taking pictures, or having pictures taken of them. I let them loose with it and they took hundreds of photos on my phone, posing with each other and then all gathering round squealing at the finished picture. It was so funny to watch. I taught them a few poses 😉 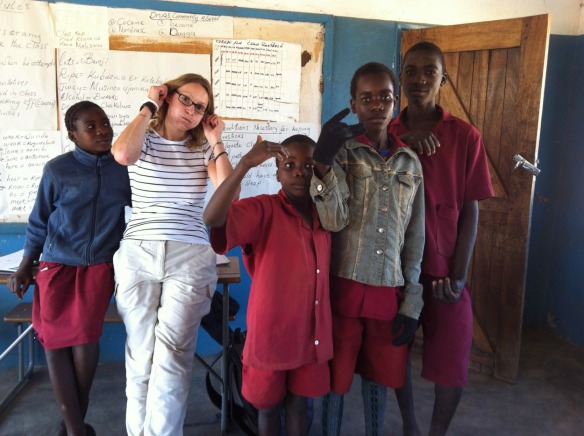 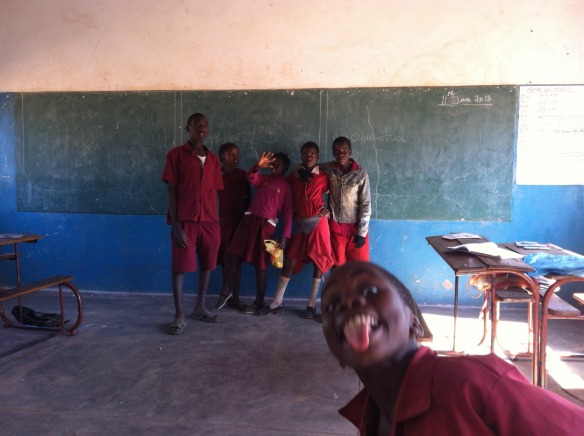 Getting there is a bit of a challenge too. It’s the most rural school we go to. Right in the middle of the bush. The [mud] houses are all over the place and so many kids have miles to walk to get there. And if they’re late they have to sweep the yard, or do other chores before school starts. Although I’m not quite sure I get this as that makes classes start later anyway. But, although they have a syllabus and lesson plans, it’s still very flexible and they don’t seem to be stuck to as rigidly as you’d find in England so I guess it all goes hand-in-hand. This morning we got driven in one of the pickups. The double cab one. Which, on the face of it, seemed a great bet; it’s chilly here in the morning so whizzing along in the back of a pick up or in the safari truck would have been cold, cold, cold. However, it was a journey that reminded me of playing Daytona rally with my brother in the arcades when I was little. High trees either side of a single sandy track – hard right, hard left – with the morning sun just glistening through the trees. Bloody hell, you don’t half get shaken about though, uneven ground and tight corners. As I got out of the truck at the end I felt like my back surely must be broken. I am pleased to report it wasn’t. Oh, and there’s also a bit of the road where you have to drive through the river to carry on. 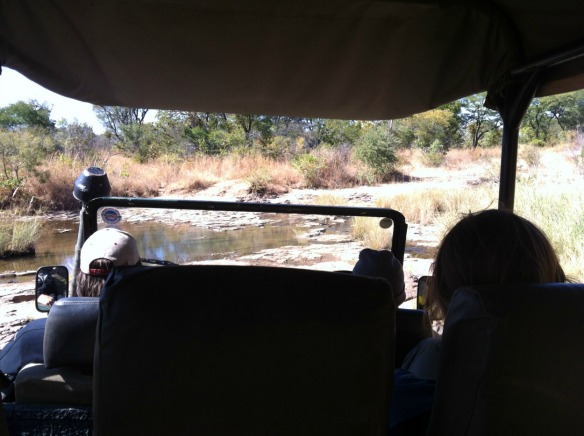 Oh, and one last thing about today? Dad, you’ll never guess what we got given for lunch. Frankfurter sausages and salad. How I chuckled. No mini eclairs in sight though 😛