The second bit of my Vietnam adventure took in the cities of Hue (pronounced h-way, not huey, like the guy from Yorkshire on our sleeper bus insisted it was), Hoi An and Ho Chi Minh City (and a lot of loooooong bus journeys in between each one). We’d already booked our sleeper bus tickets in Ninh Binh before we saw on the news that the super typhoon was due to hit Vietnam right on the central coast – right on Hue, the next day – exactly the time we were due to get there. Hmm, not exactly ideal. Luckily for us, it decided to change it’s course and ended up missing the coast completely, although the first day we got there it was very rainy and windy all day (some remnants from the typhoon) so we could do nothing more but have a chill out day. Part of a rainy day in Hue for us resulted in an Indian FEAST because the local Indian restaurant was only a few doors down. Exactly what we did on the first day in Luang Prabang in Laos so we decided to make a tradition. I felt more stuffed than a shop full of teddy bears afterwards but, damn, it was worth it. After weeks of noodles and the like it was bloody lovely to have a change, and reminded me when I was in India back in July.

Hue is an old city with a lot of history, and an imperial city that’s not dissimilar to the Forbidden City in Beijing (although nowhere near as big). Over the couple of [dry] days we had there, we just spent a fair bit of time wandering around the city and hired bikes to get out into some small villages out in the countryside. It was one of my favourite places, mainly because I just had so much fun. My Hue Highlights: 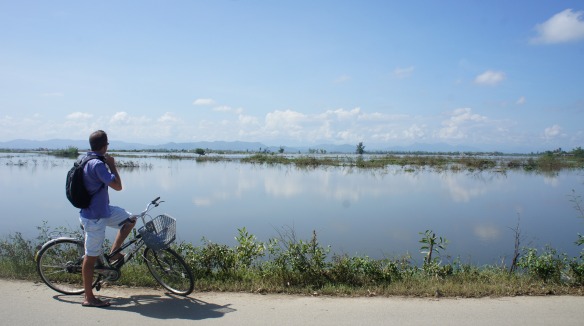 After Hue, Hoi An was a completely different kettle of fish. Old and historic, but in a completely different way. Very French-colonial and quaint, with lots of old wooden and coloured buildings along the river covered in lanterns swaying in the breeze. It’s an UNESCO world heritage site, just like Luang Prabang in Laos, and it reminded me of LP too. Even down to how touristy it was, Yep, the few old streets near to the river were just full to the brim of tourists strolling round, and all the shops were either art galleries, tailors, handicrafts or bars and restaurants. Vendors from pretty much every shop would shout out as we walked past. When we sat down to have a beer or some food, people would try to sell you stuff while you were sat there, or even eating. I found it a pain in the arse, and I’m even more patient nowadays. Luckily we had learnt the Vietnamese for ‘No thank you’ and ‘I’m not interested’ so once you trotted that out they soon disappeared, but imagine saying it 50 times a day over and over again (and I’m not even exaggerating). Arrghhhh. That aside, it’s a very pretty place, but I couldn’t help but have the feeling that it wasn’t the real Hoi An. Those pretty 3 streets down near the river just all seemed to be geared towards the visitors. The real Hoi An was away from the river, which we managed to explore a little bit before the floods. We found lovely baguette sellers (the Vietnamese like their sandwiches), a smashing little cafe with the friendliest people and the cheapest beers (only about 15p each and buy 2 get 1 free) and the best food stalls for dinner. We never got to explore the beaches because of the floods which is a shame, but all in all I enjoyed my time here, and in fact those few days ended up being a proper little adventure, that I couldn’t have predicted, and that’s what makes Hoi An memorable for me.

Heard of Saigon? Or Ho Chi Minh City? It’s the same place, a big sprawling city in South Vietnam. It was renamed HCMC in 1976 but it’s still commonly referred to as Saigon (which I think I like better). It’s a 24 hour bus journey from Hoi An. Yep, that’s right, 24 hours. Honestly, it’s not as bad as it sounds. Really. It was actually two 12 hour journeys, split with an hours wait in the middle to change buses. After all my travelling this year, long journeys are now the norm. It’s short journeys that are out of the ordinary. My next flight, from Cambodia to Singapore, is only 2 hours. How exciting, I can’t wait! It’s going to seem like a bit of a treat, haha. I then have a 6 hour wait in Singapore before a 7 hour flight, but hey, that’s not the point.

HCMC is big, loud, brash, noisy, hot, dirty, a bit seedy and IN YOUR FACE. Just how I like a city to be. Well, maybe not the seedy part. The traffic is a nightmare, there’s thousands of scooters and trying to cross the road is like running the gauntlet. Moto drivers and bar owners constantly shout at you to get your business, and the usual baguette and noodle stands line every corner. I have to admit, I was getting a bit ‘city-ed’ out by the time we arrived here. Still, in true travelling style there was a big city out there to be explored, so we spent a few days walking lots, eating, finding cheap beers (naturally) and visiting a museum and war tunnel or two.

In no particular order, my favourite things about Saigon: 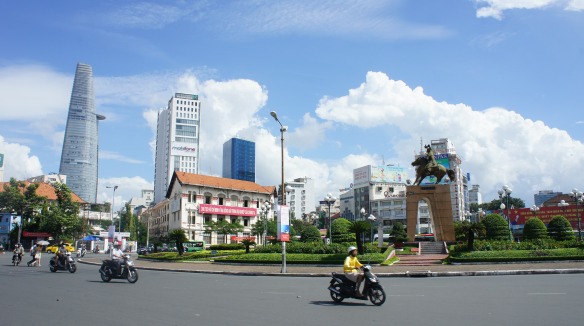 I loved Vietnam. I really, really did. I’ve wanted to visit for years, and I’m well chuffed that I now have. I learnt loads, had lots of fun, met some great people, saw some beautiful scenery and had a brill adventure. It’s been my most favourite SE Asian country so far but I can’t quite put my finger on why. Just a feeling. I think I’ll be back someday. There’s so much more of the country to explore, and maybe next time I’ll make it even more of an adventure. And get me one of those scooters.