So I went to a little island (it seriously is tiny, check it out on google maps) called Koh Mak for just over a week. It’s kind of a filler time, something to do in between landing in Thailand and waiting for Nick to fly into Bangkok. I didn’t want to go South or East (Ko Samui, Krabi etc.) as that’s where we’ll be heading together at some point so I looked for somewhere [fairly] close to Bangkok that I could head to for a bit. After the last 3 whirlwind months I figured I’d choose somewhere that I could relax and chill out for a bit. Somewhere I could just have a bit of alone time, where I could catch up on my blogging, reading and so on.

So, after a 6 hour bus journey and an extortionate short taxi ride (robbing bastards) I found myself stood on a pier looking out over the bright blue ocean in the sun and thought, yep, life is pretty sweet right now. A hop, skip and a jump later and I was on the back of a speedboat whizzing through the nice calm sea from the mainland to Koh Mak. This speedboat journey was particularly pleasant and quite glamorous; wind in my hair, sun on my face and lovely scenery to gaze at. The speedboat ride back just over a week later was not so pleasant. The sea was rough so the boat was jumping about all over the place. I spent the entire 50 minutes clinging on for dear life, getting drenched from the waves coming over the side of the boat and wondering when the boat would either a) capsize or b) break in two from the force of jumping and then landing with full force. I remember thinking I didn’t really want to add ‘boat accident’ to my list of accidents I’ve had so far (taxi and bus), and how my iPhone would be ruined if I ended up in the sea. Luckily, we stayed the right way up and I live to write about another day.

So the first night I got to the island I stayed in a fairly posh, pretty amazing room with a panoramic view of one of the bays, a massive king size bed and a floor-to-ceiling window next to the toilet (to take in that amazing view). And, for the first time since I’ve been travelling, that night I wished I had someone there to share it with. I still don’t know why. Maybe it was the view, maybe it’s because the island was quiet, maybe it’s because it was quite a romantic setting, maybe it was the huge bed. I don’t know. I just know it all seemed a bit of a waste just for me. It was the kind of place that seemed like it should be a bit special. Not just for a run-of-the-mill, filler week for just me. So, I watched an amazing sunset, lightening storm and the sunrise the next morning out of that window but the decided to find somewhere else. I just couldn’t spend a week there, I wasn’t feeling it. Plus, the wifi didn’t work properly. On an island where you’re alone and there’s not that much to do, this is a Big Thing.

So, I moved to the beach, to a little resort called Monkey Island. No king size, air conditioned room this time; I chose a little beach hut with a fan and a shared bathroom. No more wishing someone was here with me for this one, the resort was cute, had a bar (although it shut at 8pm) and was right on the beach. And had decent wifi. Sold. 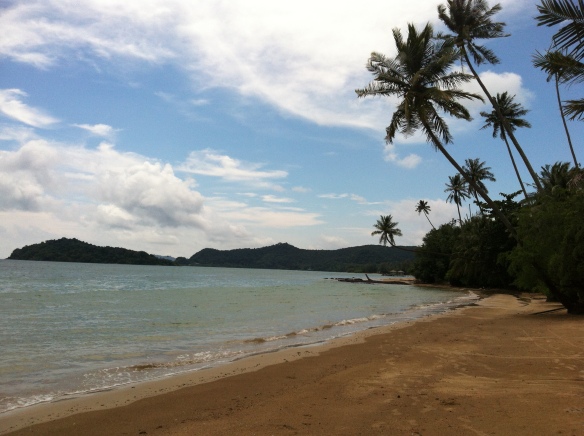 And there I stayed for just over a week. It’s low season for Koh Mak (as it’s the tail end of rainy season in Thailand just now) and so it was very quiet. There’s hardly anyone about (there were only a handful of us staying at Monkey Island) and a lot of things are shut. So, on a small island where there isn’t a lot to do in high season, there really wasn’t much to do at all in low season. Which, is kind of why I went there. I fancied a bit of downtime, although, if you know me you’ll know I like to be busy pretty much all the time and get a bit twitchy if I sit around too long, so why I decided to go there I’m not actually quite sure. Maybe subconsciously I thought it would be a good rest. Or a challenge. And, yep, I ended up getting twitchy. But, it also did me the world of good. So, all in all a win. But, I was ready to leave by the end of it, ready to get back to the hustle and bustle of Bangkok.

So you’re probably [not] wondering what I did with myself for just over a week? I’ll tell you. 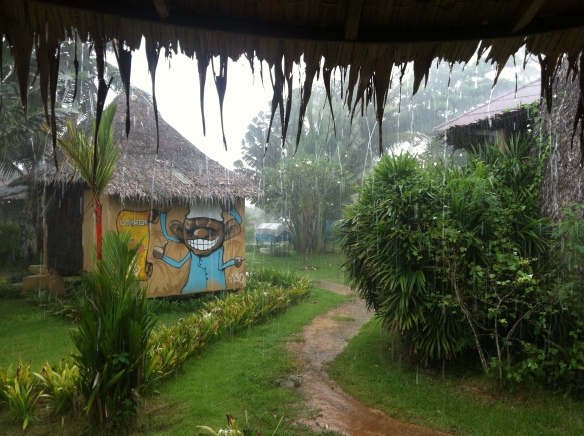 So, a pretty relaxing week, but I was ready to leave. Ready to get back to a bit of city life and civilisation. It did me the world of good though, to just stop for a while and have some time alone. To figure some stuff out, recharge my batteries and look forward to the next adventure when Nick will join me for the rest of my time in South East Asia.